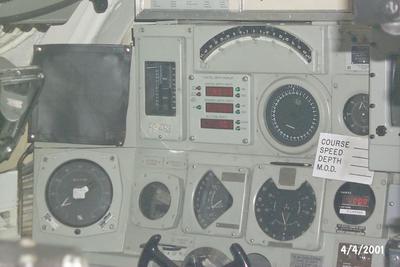 USS DOLPHIN is a non-combative ship and it's SCP (ships control panel) is not classified. The exeception is the covered area on the top left of the "scp". It is believed that USS DOLPHIN's "scp" will be for the public to view in a museum after 2010.

Did you know that USS DOLPHIN operates with a "lone helmsman"? He is the stern planesman and helmsman all in one. AGSS-555 does not have bow planes nor fairwater planes. A hard concept to accept at first, but it's true. Being the deepest diving sub in the world, it was decided to minimize the number of hull openings, therefore no bow planes or fairwater planes.
Posted by G-Man at 10:06 AM

Interesting, G-Man, thanks for sharing.