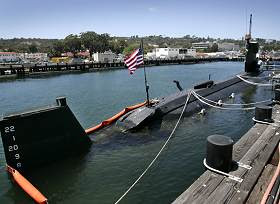 February, 22, 2007, Jack Innis, a columnist of the Log - a boating and fishing newspaper, wrote an article about the donation of the Dolphin. As you know, the Dolphin was on the NAVSEA Donations program website before it disappeared due to "reconstruction" of the website. It still hasn't appeared on the website, however, there is an email address if you would like more information on the ships donation program. I'm not going to spoil what the article says, you'll just have to read it yourself.
I tried to contact NAVSEA and recieved this response to my question about the donation of the Dolphin in June. Their response was "...the Dolphin is on donation hold." .

I was contacted by a reporter from the San Diego Tribune. He wrote an article about the Maritime Museum bidding for the Dolphin. Hopefully, the Dolphin will be docked and open for business in the near future.
Another question arose while researching for this post: Has anyone contacted the Navy League and if so, does any entity want to "sponsor" the Dolphin?

I don't understand the title of this blog.
Poetry