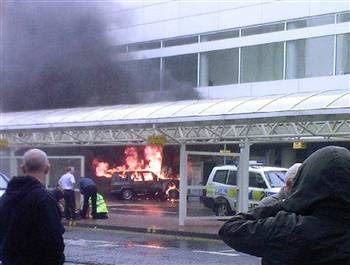 This is the airport at Glasgow, Scotland where a Jeep crashed into the main terminal. The authorities believe that this vehicle bombing and the two other vehicles that were found in London are linked. Two men were arrested. Five bystanders injured, but not seriously.

There were people screaming and running from the SUV, including one of the assailants. One [assailant] was reported to have poured gasoline under the vehicle and set it on fire after crashing it through the glass doors.

The airport was evacuated and all of the flights were suspended - for how long, we're not sure. Other airports in the UK were also suspending their flights on Saturday. The United States' response was to increase its security in some airports, but not the threat level for now. Expect more security in the airports for a while.


Some links - here and here about the story.

Don't tread on me,
DPG